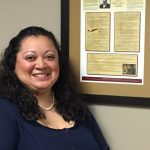 After four years working at a freelance agency, Cynthia Sobolewski began at UBA in 1995.  Cindy attended Chicago College of Commerce and received her CSR license in 1991 and her RPR certification the following year.  In 1995 she received her RMR certification.  She is a member of ILCRA and NCRA.  Ms. Sobolewski was a court reporter at UBA for 20 years and then transitioned to office administration, where she handles quality assurance and is the firm's social media manager.  Cindy was born and raised in the western suburbs and now resides in Blue Island with her children.