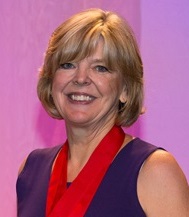 It is my distinct honor and privilege to make the presentation for this year’s Distinguished Service Award. I would like to thank my fellow committee members, Bonni Shuttleworth and Lyn Grooms, for their work on the committee. I have to say that, of all the duties I’ve had on the ILCRA Board and various committees, this one has by far been the most enjoyable. Gathering background information and talking with the recipient’s family members and even secreting them here in the hotel this morning has been such a fun experience.

This year’s recipient started out working at a pizza parlor and gave court reporting school a try at the suggestion of her mother. She went from working for other people to partnering in her own firm. She’s presented multiple seminars and written articles for national publications. She’s soft spoken but a tigress on that little machine. She’s wowed us with multiple championships in the ILCRA speed and realtime contests and numerous medals in NCRA speed and realtime contests, and this year she took on the world at Intersteno and finished third.

If you haven’t already figured it out by now, this year’s Distinguished Service Award recipient is Donna Urlaub. Before I go any further into the presentation, I want to invite into the room Donna’s family members, business partner, and co-workers, who are so very excited to be here to share in this special moment with her. We are happy to have with us here today: her husband of 44 years, Dave; her daughter Dayna and son-in-law Nick; her grandchildren, Sophia, Caleb and Leo; her sister Pam and brother-in-law Jim, and her sister Annis and brother-in-law Ernie. Her partner, Nick Bowen, and several of the reporters from her firm also made the trip down today.

Donna’s 85-year-old mom, Gloria Jones, and daughter Diana were unable to be here today, but I know they are very happy that she is being recognized for her contributions to the profession.

Donna grew up on the West Side of Chicago in an area called Austin. She attended Francis Scott Key School and graduated from Austin High School. She worked at Parkside Pizzeria and later for Courtesy Foods. Her mom took public transportation to and from work and one day she brought home a brochure advertising Court Reporting. Donna decided to give it a try. She attended Bryant & Stratton Business School and graduated within ONE YEAR. Does that surprise anyone?? After graduation she worked for Sullivan Court Reporting for 15 years. In 1984 Donna formed Urlaub Bowen Court Reporting and Video Conferencing with her partner, Nick Bowen, and they celebrated the 30th anniversary of the firm last year. Urlaub Bowen is definitely a family business as Donna’s daughter Dayna and her sister Pam both work at the firm… making it quite difficult to communicate with the family members about this award during work hours and keep it a secret from the boss, I might add!!!

Donna literally married the boy from across the street, as Dave also lived on Ohio Street, where Donna and her three younger sisters lived with her mom. Dave & Donna adopted their daughter Dayna and then 20 months later they had their daughter Diana. She now has those three lovely grandchildren with us today. When she’s not competing or working, she enjoys spending time with the grandkids, walking her dog Maya and running 5k races.

Donna has given so much to this profession. She has served on committees for ILCRA and served at least eight years on the CSR Board. During her time on the CSR Board she was always concerned with the reporting students and getting them to the point where they could pass the exam. Many of the CSR tests were created from transcript material that Donna submitted. Her passion for the students is evident when you see her talking to them on breaks at ILCRA and NCRA conventions.

She also carried that passion a step further when she established a student scholarship in memory of her longtime mentor and outstanding educator, Bob Fields. This memorial scholarship, funded solely by Donna, has been given each year since Bob passed away to a court reporting student selected randomly in a drawing at ILCRA convention.

From what I’ve seen and heard, I think Donna’s brain must idle on Steno, or maybe it never idles at all! One of her dear friends shared with me how continually impressed she is by Donna. She said that oftentimes while they are in the midst of dinner conversation, Donna will stop her and say “how do you write that?” followed by some discussion of Steno, followed by Donna picking up the thread of the conversation exactly where they left off!

Donna has won the ILCRA speed contest 11 times since its inception in 1986 and has won the realtime contest four times since its inception in 2007. She has put Illinois on the map by medaling in the NCRA speed contest 4 out of the last 5 years, and now finishing third this year at InterSteno. I know she’s also medaled several times in the NCRA realtime contest, finishing second this year, but I was unable to find all of those statistics. Cindy from Urlaub Bowen said they are going to have to build on a trophy room at the office!

Even with all of her many accomplishments, Donna is one of the most humble people I have ever met. It’s never about her; it’s always about the profession and the students.

On behalf of the DSA Committee, I am pleased to present this year’s Distinguished Service Award to Donna Urlaub.

Presented in Fall 2015 by the Illinois Court Reporters Association (ILCRA).